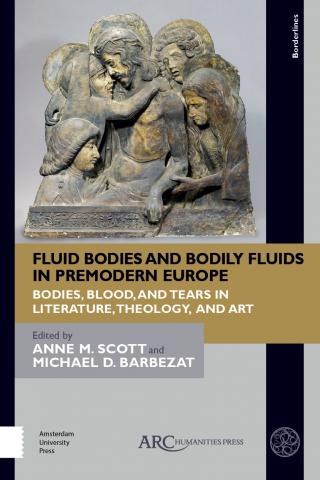 The book review editors of H-Soz-Kult, one of the main German online platforms for historical research, asked me to review a new volume on bodily fluids in premodern Europe. And of course I accepted.

The collection under review offers a rich variety of contributions concerning the role of the body and bodily fluids in premodern theology, literature, and art. The aim of the volume is to examine how premodern authors and artists focused on the body and its fluids as a way to “imagine and describe transformations of the larger world” as well as to “redefin[e] the social, political, and religious realities of the world” (p. 1). The body in flux therefore functions both as a model and a metaphor of change. The volume contributes to the growing scholarly interest in bodily fluids, adding valuable perspectives on corporeality and materiality.[1] Whereas the essays differ in terms of discipline and time period, the editors put together meaningful comparisons and connections by grouping the chapters into three thematic parts.

Part 1, “Transformative and Manipulative Tears”, demonstrates how late medieval and early modern attitudes towards tears gradually changed. The opening chapter by Anthony Bale focuses on the strong religious feelings and belief of the English mystic Margery Kempe, distinctly expressed by her periods of weeping, sobbing, crying, and roaring. Aptly asking “where did Margery Kempe cry?”, Bale argues that although her constant weeping disturbed some of her audience, in fact it occurred in very specific places. Bale demonstrates that people came to recognise Kempe’s sincerity as a devout weeper and that her crying in holy places in, for example, the Chapel of Mary Magdalene in the Church of the Holy Sepulchre in Jerusalem, represented an outpouring of her moral and pious understanding. The topic of religious tearfulness is further explored in Hugh Hudson’s essay on the Lamentation of Christ. Looking at these late medieval paintings and relief sculptures raises an interesting question, because they simultaneously show the passionate expression of grief – by Mary and followers – as well as the restraint and impassivity of other devotional figures. Exploring attitudes towards tears in other artworks and historical sources, Hudson argues that viewers understood saints’ tears as the visual demonstration of saintly devotion, while the dry eyes of contemporary figures were commendable for their humility and decorum. Susan Broomhall analyses Catherine de’ Medici’s crying in the public domain of the court and during diplomatic encounters. In this male-dominated arena, one had to maintain emotional expression and weeping was widely understood as political weakness. But when the Spanish ambassador presented a papal nuncio with advice regarding the state of religion in France, Catherine’s tears over her son’s death earlier that year excused her from reading and answering the brief, thereby seriously delaying any formal response. Catherine’s “lacrimal persuasion” could be employed as strategic tool, for it enabled her to form social and intimate relationships with ambassadors, which helped her to convey particular messages as significant. As Broomhall convincingly argues, therefore, Catherine’s weeping was often mistaken by her male contemporaries as frailty, but instead should be seen as a political performance.

The essays in Part 2, “Identity in Blood”, offer interesting perspectives on how premodern poets, playwrights, and clergymen discussed blood that went beyond the individual and denoted the community. Anne Scott’s chapter analyses the concept of “blody bretherne” (blood brothers) in the fourteenth-century poem Piers Plowman by William Langland. As he used blood to refer to both the lifeblood of the body, including the blood in the body of Christ, and blood in relation to the church sacraments, Langland closely connected corporeal and spiritual lives. The search for a greater connection with Christ through the emulation of his suffering is highlighted in the essay by Samuel Baudinette, who examines the practice of flagellation by Dominican friars and nuns. Following Meister Eckhart’s criticism of outward displays of penitential devotion, Baudinette explores performances of asceticism and what he calls “hermeneutics of embodiment”: literary models of asceticism found in treatises and tales, which aided readers in their spiritual paths towards detachment and internal suffering. The understanding of blood beyond the physical is also highlighted in Karin Sellberg’s contribution, though in a different way than the first two essays. Sellberg focuses on the sanguine humour in both medical texts and the Shakespearean plays Macbeth and King Lear. Doing so, she demonstrates how blood linked various notions of temperance and balance, both in the interaction between body and soul, as in inner passions and politics.

Though many of the topics examined in this volume are situated in the realm of specific bodily fluids, Part 3 (“Bodies and Blood in Life, Death, and Resurrection”) shifts our perspective by focusing on fluid bodies. Diana Hiller’s essay examines the bodies of various saints and martyrs in Christian art, noting that their portraits show no sign of blood where one would realistically expect them. While such bloodless depictions may refer to their heroic stoicism, Hiller notes three important exceptions, namely St. Sebastian, St. Francis, and St. Peter of Verona, whose depictions can be overflowing with blood. She makes the convincing argument that the explicit portrayal of blood can be accounted for by their function as alter Christus. The fact that these saints acted in the person of Christ is literally told by their suffering bodies. Helen Gramotnev studies the bloodless corpse in Rembrandt van Rijn’s Anatomy Lesson of Dr. Nicolaes Tulp (1632). This famous painting celebrated the surgeons’ guild as well as notions of progress and knowledge, but at the same time incorporates vanitas messages to remind viewers of the beauty of God’s creation, the fragility of life, and the punishment of criminals. The final essay, by Michael David Barbezat, traces theological notions of the resurrected body in the works of Augustine of Hippo. In Augustine’s early writings, the resurrected body would lose its flesh and blood and was perceived as ethereal. But Barbezat demonstrates how an older Augustine worried that this ethereal body would lose its humanity as well, thereby shifting his thinking about the corporeality of the perfect body and suggesting a more material body after all. Barbezat ends the volume with an excellent short epilogue, connecting Augustine’s considerations to today’s questions as to where personhood resides, and whether futuristic fluidities of the body could go too far.

A well-balanced volume, this book is an important contribution to the current historiography on the meaning and function of bodies and fluids in the medieval and early modern world. The volume also encourages further examination of other bodily fluids and fluid bodies, such as the transformation of bodies through water or the expressions of milk. A minor complaint is that all the illustrations are printed in black and white, which makes it almost impossible to discern references to colour in, for example, Hiller’s essay on Christ’s stigmatic rays to St. Francis from golden to deep red (p. 147). Nevertheless, there is much of value here for scholars interested in the history of the body, its fluids, and their wider importance. The varied and thoughtful essays provide a vivid picture of premodern times and places that undeniably deserve further scholarly attention from cultural historians, literary scholars, and historians of religion.

Note:
[1] It builds on the important works of Caroline Walker Bynum such as The Resurrection of the Body in Western Christianity, 200–1336, New York 1994; id., Metamorphosis and Identity, New York 2001; id., Wonderful Blood. Theology and Practice in Late Medieval Northern Germany and Beyond, Philadelphia 2007; id., Christian Materiality. An Essay on Religion in Late Medieval Europe, Princeton 2011.