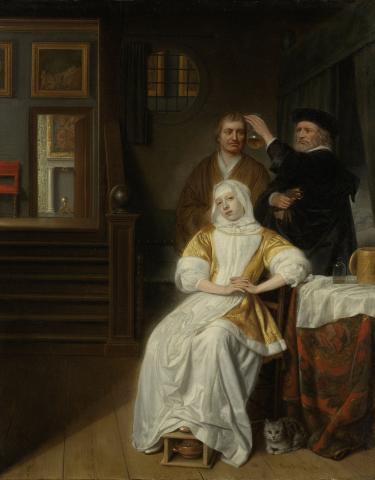 My review of Michael Stolberg’s Uroscopy in Early Modern Europe (Ashgate, 2015) just appeared in Sixteenth Century Journal XLVII/3 (2016): 699–700. It’s a fantastic book, easy to read, and hence a pleasure to review. For a more elaborated opinion, see the following:

Reviewed by: Ruben E . Verwaal
University of Groningen, The Netherlands

An overwhelming trust in the diagnostic potential of uroscopy permeated early modern society. When in the mid-eighteenth century a peasant approached the German physician Johann August Unzer with a glass flask filled with urine, Unzer told him he actually preferred to know who had passed the water and what the complaints were. “Can’t you tell from looking at the water?” the peasant replied (16). Indeed, for centuries physicians had lived by the ancient precept that to know what went on inside the body, one must examine what flowed out of it. Collected in a transparent and round-bottomed matula, urine was scrutinized by seeing, smelling, and even tasting. From its consistency, contents, color, odor, and taste, physicians drew conclusions about the state of the body and the course of the disease.

Originally published as Die Harnschau: Eine Kultur- und Alltagsgeschichte (Cologne: Böhlau, 2009), Uroscopy in Early Modern Europe is the first comprehensive account of the practice of uroscopy. This is somewhat surprising, for, while most medical historians have acknowledged the importance of uroscopy in late medieval and early modern Europe, a systematic study was still lacking. Plumbing an impressive number of textual and visual sources, Stolberg explores why urine inspection remained popular among ordinary patients and learned physicians, and why skepticism eventually set in. Stolberg’s important study also forces medical historians to rethink patient-doctor relationships and the role of “objective” diagnostic methods.

The book begins with a demonstration of how uroscopy was perceived and experienced in everyday life. Stolberg argues that uroscopy was popular across Europe and throughout the early modern period; convinced as they were that urine was the most reliable source for a sound diagnosis, ordinary and elite patients alike brought their water to the practitioner’s attention, either in person or even by messenger and post. Whereas the practice of examining urine remained largely the same, however, Stolberg does observe a gradual change toward the inclusion of other diagnostics besides urine, such as the feeling of the pulse and observing a patient’s complexion.

For uroscopists and patients there was little reason to question the credibility of uroscopy. As Stolberg demonstrates, its long-lived popularity can be explained by the inability of falsification. Patients who suddenly recovered despite somber prognostications were said to have benefited from the doctor’s treatment, while a sudden deterioration was ascribed to, for example, the awakening of a “dormant” morbid agent. Uroscopy also had many advantages; it was inexpensive and provided a level of anonymity when messengers were used to get the urine to a doctor, a strategy that was especially attractive for patients suffering from venereal diseases or women who suspected themselves to be pregnant. Finally, the ritual of inspecting one’s urine gave patients confidence, as they saw expert knowledge being applied to find out what was wrong with them.

Stolberg objects to common misconceptions of uroscopy as merely an empirical procedure. Granted, much hands-on experience was needed to learn the skills of uroscopy. Nevertheless, based on learned publications and case histories, Stolberg convincingly argues that uroscopy was based on complex theoretical principles rooted in humoral physiology and pathology. For example, the sixteenth-century doctor Johann Lasster not only deduced the complaints and physical constitution of the patient from the urine’s properties, he also applied humoral concepts of cold and slime to interpret the course of the disease, which resulted in dietary prescriptions.

The fifth and last chapter discusses the reasons for the gradual decline of uroscopy in learned medicine. Stolberg shows that uroscopy could lead to may misdiagnoses, causing the practice to be increasingly questioned by “uroskeptics” (126). Although in the eighteenth century many physicians still practiced and praised the inspection of urine, Johann August Unzer warned against the physician who, “in order to draw at least even with the charlatan in the art of foretelling, puts up with determining and judging the condition of the patient solely from the natural signs, especially the urine, and from this derives his measures for a cure, without getting involved in a thorough examination” (156). Despite attempts to modernize uroscopy by introducing balances, chemistry, and microscopy, in the nineteenth century its fame was fast declining, as learned physicians’ reputations were threatened.

In a separate chapter, Stolberg analyzes the visual representations of uroscopy in early modern Dutch genre painting. Although many art historians have argued that these representations set out to ridicule the “piss prophet,” Stolberg shows that the uroscopist was in fact depicted as a “truth-seeker.” The omnipresence of alembics, mortars and pestles, books, globes, and other objects of inquiry, all of which symbolized knowledge and skill, corroborates this argument. As many of these paintings were also conceptually and visually similar to depictions of alchemists, Stolberg argues that uroscopists’ specialized knowledge could reveal women’s secrets, such as lovesickness or pregnancy. Yet Stolberg’s exclusive focus on Dutch genre painting does raise the question of to what extent this argument holds up for other parts of Europe. Indeed, the question of regional differences is one that remains largely unanswered. Although the particular strength of Stolberg’s book is his ability to draw upon an unparalleled amount of sources across time and space to tease out similarities, regional and temporal varieties are sometimes obscured.

Nonetheless, Uroscopy in Early Modern Europe is an invaluable study of early modern uroscopy. The book is well supported by footnotes and a bibliography, and is lavishly illustrated with both black-and-white illustrations and two sets of color plates. In-line thumbnails direct the reader more easily to the referred plate. Although this reviewer has not compared the text with the original German, the translators have done an excellent job in making this erudite book an enjoyable read. In sum, this well-informed study is a major contribution to medical history for demonstrating the importance and ubiquity of an “objective” approach to diagnoses throughout early modern Europe.

On the cover, you find the amazing Samuel van Hoogstraten’s ‘The Anemic Lady’, 1660-1678, Collection Rijksmuseum, Amsterdam. Notice the well-filled urine flask, the basket for transport, and the much-telling expressions of the lady, the men, and the cat.