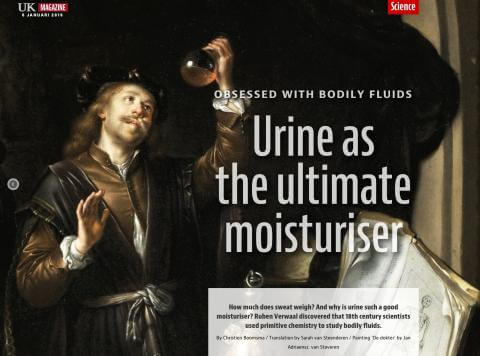 How much does sweat weigh? And why is urine such a good moisturiser? Ruben Verwaal discovered that 18th century scientists used primitive chemistry to study bodily fluids.

So there he was: Santorio Santorio. The early 17th century Italian doctor had constructed a giant ‘weighing chair’, in which he spent most of his day. The construction was intended to help him study his own metabolism. How much did he weigh at the beginning of the day? How much did his food weigh? How much did he poop or pee? And most importantly: was there a difference?

The answer was yes. The difference between intake and excretion turned out to be approximately half a kilo. ‘He concluded therefore that that was the amount of fluids he had sweated out’, says medical historian Ruben Verwaal. ‘That was in part liquid, but the rest of it he called ‘insensible perspiration’.’

He actually turned out to be right. Around that same time, anatomists discovered minute glands and pores in the skin through which sweat could escape. ‘It wasn’t quite correct of course, because the concept of ‘energy’ didn’t exist yet’, says Verwaal. ‘But his studies give us great insight into the way of thinking at the start of the Enlightenment.’ Others replicated his research, including the 18th century physician Johannes de Gorter from Enkhuizen. ‘He found that the difference was smaller, but attributed that to the fact that he lived at a higher latitude and that people here probably sweated less.’

The primitive research into sweat shows two things: how science in the 17th and 18th century became more and more experimental as influenced by Enlightenment thinking, and how the body was studied on the basis of bodily fluids. It was not just sweat that became the subject of serious scientific study: famous researchers such as Herman Boerhaave or Antoni van Leeuwenhoek also devoted themselves to the study of urine, blood, semen, and tears. And if you focus on their approach, Verwaal discovered that you can achieve great insight into 18th century scientific history.

In short, there is no reason to be disgusted by a study into ‘bodily fluids’, says Verwaal. ‘It’s strange, really’, he says, ‘that people have no problem with, for example, urine as long as it’s inside their bodies. Once it comes out, they think it’s disgusting.’

Verwaal thinks that this attitude towards bodily fluids is also strongly culturally defined. In the eighteenth century they did not make such a big deal out of it. The kruikenzeikers from Tilburg were able to sell their collected urine to the textile factories for a pretty penny: they used it to wash their wool. ‘And I’ve also found an example of a report of a noblewoman who would wash her face with morning urine every day. It worked kind of like a moisturiser, keeping her skin very young. Now we know that that is because of the urea, a residue in the urine that indeed retains moisture.’ Verwaal does not think that the fact that it smelled bad was a problem. In a time when deodorant was non-existent, extensive washings were looked upon with suspicion and the canals were used as a kind of open sewer, people were probably quite ‘smell blind’. ‘Everyone smelled,’ he says.

Verwaal finds all of that interesting, but these are only little side paths in his research. He is most interested in finding out how scientists – especially the Leiden professor Boerhaave and his followers – used bodily fluids to understand the body. There had been anatomical research done, but that was only concerned with dead bodies. Fluids such as urine, blood, and sweat, however, came from living beings. They analysed these by taking the first steps on the road to modern chemistry.

‘They either fermented or distilled them’, says Verwaal. ‘Boerhaave would make a fire under his alembic which caused the liquid to evaporate and then precipitate into a pipe. There, he found crystals, which he concluded to be salt. A bit of black goo also remained which he called ‘earth’, because back then, scientists still thought there were four elements: earth, water, oil, and salt.’

It was the start of modern chemistry, says Verwaal, following the alchemical search for the Philosopher’s Stone in the medieval period. Chemistry was a compelling new field that seemed ideally suited to the study of liquids. For instance, Boerhaave discovered that if you leave urine out for a year, crystals will form. Others actually found out that this process could be speeded up – heating caused crystals to form on the rim of the glass after just 24 hours. ‘Moreover, he saw that these crystals had the same structure as bladder stones, which were a common affliction among 18th century men. They could grow to the size of a large egg.’

The only cure for bladder stones was removing them through an incision in the anus – risky business in an age where antibiotics did not exist. Anyone who survived the procedure would proudly preserve the stone or display it in a nice box.

Now that Boerhaave had provided insight into what a bladder stone actually was, he could advise on its prevention: he thought that changing eating or drinking habits would change the composition of urine and prevent bladder stones. This approach was rather revolutionary.

Boerhaave also experimented with the composition of urine with small experiments. He asked his students to pee in a cup after a weekend of partying and compared this to his own pee to find out the influence of alcohol. ‘He found out, by the way, that it didn’t make much of a difference, but I think that it ultimately says more about how precise chemistry was during that time’, says Verwaal.

Others – often followers of the Leiden professor – focused on other bodily fluids, such as blood. ‘Boerhaave’s student and successor Hieronymus Gaubius found that it consisted of water, earth, salt, and phlogiston. The latter is the element they used to explain combustion. It wasn’t until 1800 that they discovered that oxygen was responsible for combustion’, says Verwaal.

What is especially interesting about this research is that Gaubius used it in order to develop a theory about disease and health on an abstract level. He thought that a person with a fever had too much phlogiston in his blood. Whenever bleeding would not stop, that was caused by an excess of water. ‘He’s not just superficial anymore, he really tries to analyse things’, says Verwaal.

However, Gaubius’ colleagues immediately protested, saying there must be more to it. After all, when you put all the elements that Gaubius had extracted back together, they did not form blood. ‘So he must have made something new’, says Verwaal.

This new chemistry showed a lot of promise and was therefore used a lot. The effectiveness of the new methods did leave a lot to be desired, however. There were no great breakthroughs during the 18th century. It is possible that that is the reason for the current impression that it was a ‘dead’ period. ‘Even leading historians such as Jonathan Israel say that everything collapsed and that nothing important happened.’

But that is not true. It was a time during which experimental chemistry slowly developed, when scientists replicated experiments and debated each other wholeheartedly. And sometimes, developments like that take time. Verwaal: ‘That is what this research ultimately shows: that there was a lot going on, and that Dutch people played an important role in the development of science during that time.’