Pee in a Jar?! Dirty Materials in the History of Science 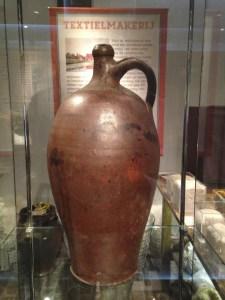 Objects can be a real pearl on the shores of history of science. Telescopes and steam engines still figure prominently in our field, and rightfully so. From the edited volume Making Instruments Count (1993) to Frans van Lunteren’s blog ‘Mediating Machines’ at Shells & Pebbles, many scholars research the role of scientific instruments in the history of discoveries, experiments, applications, and education. But besides microscopes and machines I would argue that some artisan objects and ordinary materials deserve similar attention. Piss, poop and pots might appear unrelated to history of science at first sight, but on closer inspection they open up new perspectives in academic research.

I recently visited the exhibition ‘A Wealth of Waste’ (‘Rijk van Rotzooi’) on recycling in The Netherlands around 1800 in Museum Boerhaave, Leiden. Frisian entrepreneur Watse Gerritsma takes you on a tour of smart reusing, showing how sand was transformed into glass, street waste was turned into gunpowder, faeces into fertiliser, etc. I was particularly struck by one very mundane object: the urine pot. Does such a jar with liquid excrement really deserve a place in a science museum and the history of science? This blog will show the fresh approach a dirty material can give on history of science by following the places where piss dripped and drizzled in the 18th-century Low Countries.

The urine pot is a perfect example of the importance of substances to the development of science and technology. Urine was of common use in Dutch urban centres of textile industry. In Tilburg, for example, textile workers brought their morning urine to the factory, to be stored in a jar. It was well known that the piss effectively cleaned and coloured various cloths. According to natural historian Martinus Houttuyn (1720–1798) from Hoorn, “to penetrate the fabrics more effectively in Dyeing, the Piss is much used. […] When the fabrics have been fermenting, people make use of pee to clean the wools and silks.” Despite the terrible stench, textile labourers effectively cleaned wools thanks to the cleaning properties of their own juices.

Also university-trained medical men recognised the importance of the bodily excrement and they performed various chemical experiments. In 1753, for example, medical student Johannes Schlosser (1733–1769) from Utrecht defended his dissertation on “the native salt of human urine.” This salt was of particular interest, because his teachers had proposed that this salt was essential and inherent to the entire human body. Herman Boerhaave (1668–1738) had obtained the essential salt after waiting an entire year for the urine to thicken, congeal, and concrete. Schlosser, however, noticed that in a vessel with urine, crystals already formed after one month. He urinated in a flask and heated it. Clearing the dark and thick liquor from scum and dirt, he let it rest and after one day, at the sides of the vessel, hard and slightly transparent crystals had formed. Schlosser, then, found a quick and easily repeatable method to produce ‘essential salt’.

Urine in the 18th century Low Countries was a scientific object in physiology and chemistry, a functional material in industry as well as an ordinary liquid to everyone else. This may explain why ordinary materials have received less attention in history of science than other, more ‘scientific’ objects. The vacuum, atoms, and irritability, for example, were research objects that natural philosophers developed using precision instruments, meticulous observation, sharp criticism, etc. As Lorraine Daston has already explained, these objects were “elusive and hard-won.” But bodily fluids were readily available to everyone and their existence was never contested. Dirty materials were not univocal as scientific objects, but instead could have multiple functions and meanings depending on place and person.

Besides the textile industry, knowledge of urine’s usefulness also emerged in other places. In 1761, for example, the aforementioned Martinus Houttuyn recalled the case history of a ertain “Woman of High Standing.”  In pursuit of prolonged beauty, she “until high Age, by never failing to wash her hands and face with it, had maintained the finest  skin and fairest complexion one could wish for.”  Houttuyn despised this treatment, though did not deny the power of urine: “one truly seems to be too much addicted to beauty, if one makes use of such a disgusting agent [but] We do not doubt that this Water, which is somewhat oily, can indeed strengthen to keep the Skin flexible and beautiful.”  Excreted out of one’ s body, urine could live on as a lotion for everlasting youth.

Chemical analyses of urine also helped explain the nature of diseases. Houttuyn’s and Schlosser’s medical professor at Leiden, Jerome Gaub (1705–1780), argued that only by chemical examination of bodily fluids may the physician gain insight in a patient’s insides. Gaub applied chemistry of urine to re-examine one of the most common illnesses that plagued mankind for centuries: bladder stones. He collected a volume of urine and let it stand in a vessel for some time. He observed that the urine affixed “very small particles to its surface, upon which, if recent urine is repeatedly poured, there is at last produced a crust consisting of the elements of true calculi [i.e. stones].” Gaub called this process crystallisation and used it to explain that bladder stones were formed from substances already present in urine. Chemistry of urine, then, was useful in the field of pathology.

‘A Wealth of Waste’ recalls that the textile workers in Tilburg were soon called ‘jar pissers’ (‘kruikezeikers’); something to be proud of! Historical objects like the urine pot teach us that bodily excrements such as urine were far from mere waste matter to be disposed of. Rather, piss streamed between artisanal and academic contexts, seeping into the textile factory, a woman’s bathroom and university laboratories. The manipulation of urine also contributed to new understandings of health and disease in physiological and pathological research. Thanks to chemical practices, therefore, urine received numerous new uses and applications. The flow of urine in pots and flasks can broaden our scope of history of science. We should not limit ourselves to follow academic developments within established disciplinary boundaries of medicine, chemistry, and technology. Instead, ‘A Wealth of Waste’ and the urine pot show that it is very productive and refreshing to follow objects and materials as they take us effortlessly to various fields of artisanal craftsmanship, scientific investigation, and industrial production.