The Chemical Skeleton: Why Chemistry Mattered to 18th-Century Medicine 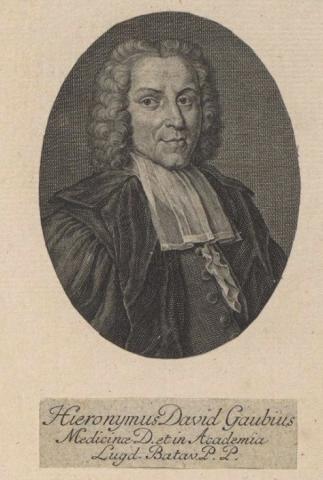 Imagine yourself as an 18th-century medical student at Leiden university. You are curious to know why you sometimes feel all weak and limp, while elderly people may have stiff muscles. Why can there be days you suffer from constipation, while on other days you have diarrhoea? Questions such as these also kept professor Jerome Gaub occupied and he believed he could answer them by “the chemical analysis of the human body.” In reference to experiments on bodily fluids and Gaub’s concept of the ‘chemical skeleton’ or cohesive force, this blog will show why chemistry mattered to 18th-century understandings of the body.

The Nobility of Chemistry

Considering why and how Jerome Gaub came to teach medical students about the chemical analysis of the human body raises questions about the role of chemistry in 18th-century medicine. For early modern chemistry was often not taken seriously as an academic discipline. Chemists such as Paracelsus and Joan Baptista van Helmont were famous, but not uncontroversial. Because of ideas of the philosopher’s stone and the existence of a universal medicine that could cure any disease, many chemists–or alchemists–were accused of quackery and heresy. Writing about the spicy escapades of European diplomats at the Utrecht peace negotiations in 1713, Augustinus Freschot even described how ladies of pleasure gathered “like chemists who recognise each other without ever having met, because the similarity of their occupation apparently has something contagious.” [1]

Despite this tarnished reputation, two Leiden medical professors pleaded for the use of chemistry at the university. When Herman Boerhaave held an oration accepting his professorship in chemistry, he stressed the importance of chemistry in medicine. [2] Struggling to explain physiological phenomena such as growth and digestion, he emphasised that if one really wants to understand how for example nutriments change into human nature, sole reference to mechanism is insufficient. One also needs to chemically examine bodily fluids such as blood and milk to understand changes in the body. [3] When Boerhaave was succeeded by Jerome Gaub, the topic of Gaub’s oration also concerned the rightful place chemistry deserved among the academic arts. Whereas some chemists had indulged in questionable research practices, Gaub was confident that others “gradually removed the mask of deceit and the mists of ignorance, in which she was veiled.” [4] In fact, no discipline but chemistry could provide useful insights in the nature and characteristics of drinks and nutriments, healthy and diseased blood, and different types of urine and excrements. Chemistry’s use to medicine, Gaub concluded, showed the discipline’s nobility.

In the course of the 18th century, the medical faculties of other Dutch universities also adopted chemistry. Utrecht, Harderwijk, Groningen and Franeker all appointed professors of chemistry, many of whom were former students of Boerhaave and Gaub. The universities also built chemical laboratories for the improvement of education. Medical men, then, increasingly worked with chemical methods and this would have serious consequences on the way they perceived the body and diseases. The idea of a chemical skeleton in the body is a case in point.

The Force of Cohesion

What then was this ‘chemical skeleton’? Professor Gaub told his students that numerous physiological and pathological phenomena of the body could only be understood chemically. The knowledge of the causes and symptoms of diseases, for example, required an understanding of the “chemical analysis of the human body.” In Gaub’s view, the human body basically consists of liquids and solids, and both are constituted by four elements: water, phlogiston, salt, and earth. The proportion of water in relation to the other elements determines the fluidity of bodily liquids and the flexibility in the solid parts. Similarly, the amount of earth determined the thickness of the fluids and the firmness of the solids. Bones, for example, were then considered to almost solely consist of earth and to be devoid of water. The fact that the other body parts remained united was thanks to cohesive power in the earthy element: “This forms the chemical skeleton of the body, and is the principle of cohesion, stability and inertness.” [5]

The chemical skeleton, encompassing the four elements and their inherent forces of cohesion, was essential to explain digestion and other physiological phenomena. According to Gaub, humans eat vegetables and meat, which essentially consist of the same elements as humans. During digestion, the body extracts particles from food. These particles are already composed of the four elements. By the powers of human nature, the body aggregates and condenses these particles and uses them in growth, nourishment, and recovery of good health. Without the so-called power of life, the great quantity of water and phlogiston would quickly start the body to rot. The fact that the body is able to preserve health and to stay alive, despite being continuously exposed to air and body heat, “may indeed seem truly wonderful.”

In case you had constipation or diarrhoea, Gaub argued something was wrong with your body’s chemical skeleton. If you did not drink enough water or ate too many glutinous aliments, it could affect the force of cohesion in the bodily fluids to become excessive, causing stickiness. This had a direct effect on the circulation of the fluids: the sticky liquid may cease to flow and lead to stagnation, obstruction, and constipation. On the other hand, deficient cohesion and an excess of fluidity could cause your bodily liquids to lack substance. The watery and thin consistency resulted in colds and phlegmatic tumours. A more bitter and thin liquid could easily penetrate and corrode other body parts, causing haemorrhage, diarrhoea, sweating, “and many disorders in circulation, nutrition, the secretions and excretions.”

Gaub’s chemical analysis of the body stood at the basis of new physiological reasoning in terms of healing powers. The professor explained how the bodily fluids and solids were constituted by a cohesive force, which he clarified by referring to the metaphor of the chemical skeleton of the body. Gaub assured his students that often lack or excess of cohesive forces would not lead to a fully developed disease. In many cases, “there is likewise a certain virtue in health by which it protects itself against single vitiations”. Physicians such as Gaub, therefore, performed chemical experiments to try to understand hidden virtues or powers that kept the human body healthy and alive. What these hidden powers were, however, still remains much of a mystery–perhaps even to Gaub himself. By further investigating the works of Gaub and his students, I hope to be able to tell you in the future.

[3] The experiments on bodily fluids are described in Herman Boerhaave, Elementa chemiae (Leiden: Isaac Severinus, 1732). Gaub continued to use this textbook for his lectures in chemistry.